APRA Porter Novelli of Sofia, Bulgaria has won the Stevie Award for Best Communications or PR Campaign of the Year - Reputation/Brand Management in the public relations awards categories of The 2011 International Business Awards. Here we look at their award-winning campaign to fight the flab. 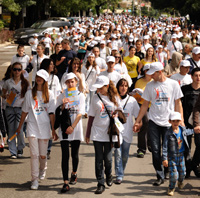 The devastating facts behind APRA Porter Novelli’s LIVE ACTIVELY! campaign were that each year more and more people in Bulgaria were suffering from obesity and related health problems, particularly children, the elderly, and young working people. Contributing factors included a sedentary lifestyle and a lack of education on balanced nutrition. Bulgaria had recently ranked fifth in Europe for having the most obese population, according to the EU’s Diogenes project.

Nestlé Bulgaria is the country’s biggest Nutrition Health and Wellness (NHW) Company, with products targeted at people from all age groups and social and professional backgrounds. Nestlé is also a socially responsible company, dedicated to long-term investment in the health and well being of consumers.

Since 2005, APRA Porter Novelli and Nestlé Bulgaria have organized an annual campaign to raise public awareness of the benefits of an active lifestyle and to promote the importance of physical activity in an urban environment. A key element in the project is to promote walking as a simple way to not only stay fit and healthy, but also to improving the environment and reduce air pollution.

APRA Porter Novelli supported the 2010 LIVE ACTIVELY! project with a huge communications campaign that included the distribution of thousands of branded hats and T-shirts, special LIVE ACTIVELY! footsteps stuck on the ground to mark the route of the Sofia walkathon; 120,000 leaflet insertions in newspapers and magazines; 60,000 posters; print ads; TV and radio spots, outdoor billboards; Internet banner ads; and a Facebook fan page.

In addition, APRA Porter Novelli arranged for the distribution in Sofia schools of 10,000 maps of South Park, with locations and details of related sport activities; and at the opening ceremony, 50 LIVE ACTIVELY! Gold Medals were awarded to top Bulgarian sportsmen.

The amount of publicity and total media space devoted to LIVE ACTIVELY! events has doubled each year.  Over 300 media outlets covered the events in 2010. The number of participants has grown by over 1,500% over the past 5 years, with 28,500 people taking part in 2010. Over 83,000 people were involved in all the 2010 LIVE ACTIVELY! activities, including 18,000 Facebook fans; and the most active participants received a total of 30,000 sports awards.

LIVE ACTIVELY! is currently the biggest sports event in Bulgaria. It is Nestlé

Tomislav Tsolov and Lubomir Alamanov founded APRA Porter Novelli in 1994.  Under their guidance, it has evolved into one of the most experienced communication groups on the Bulgarian market, setting trends for the whole Bulgarian market.

Agencies, and Lubomir Alamanov was its first Chairman, from 2001 to 2008. During these years the foundation of the PR industry in Bulgaria was formed and the Stockholm Chapter of Ethics was adopted.

APRA Porter Novelli is a full-service communications agency with a team of over 70 experienced staff.  For more information go to www.apraagency.com.

Yesterday in this space we recognized the more than 100 professionals worldwide who participated in preliminary judging of The 2011 International Business Awards, the world's only all-encompassing, fully-international business awards program.  The average scores of those preliminary judges determined the entries that were eligible to be included in final judging.

Today we recognize the members of the final judging committee for the PR awards categories of this year's IBAs.  Our sincere thanks go to

This year's winners were announced last week and will be honored at ceremonies in Abu Dhabi, UAE on 11 October.

What do you think of the PR awards categories judging committee?

In 2010 we introduced a lot of new public relations and communications awards categories in The American Business Awards, and we haven't added any new ones for 2011.  But I thought I'd take a moment here to outline the categories that I think are the best fit for public relations, corporate communications, public affairs, and investor relations professionals, because not all of them are plainly labelled.

First off, there are those categories that are plainly labelled, and they include the many Communications or PR Campaign/Program of the Year categories we introduced in 2010.  Here are the main communications categories (the letter/nomination combinations are our internal category codes):

Read the rest of this article here...