We asked Mireille what winning her Stevie Awards has meant to her and her company.

“Winning a Stevie Award was a resounding endorsement of HUYA’s business model,” Mireille told us. “Our aim is to enable and accelerate global development of innovative biopharmaceuticals originating in China.” 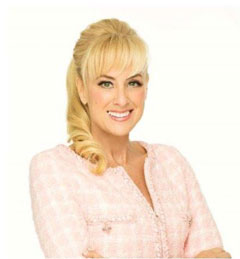 “This prestigious award, with its recognition of outstanding performance in the workplace, came at a pivotal point in HUYA’s evolution,” added Mireille. “Our novel anticancer therapy, HBI-8000, had entered clinical trials in Japan, plus it had been approved as Epidaza® by the Chinese FDA. HUYA’s drug has immunomodulatory properties, which are important to the clinical development of immuno-oncology therapeutics. The Stevie award was a much-appreciated affirmation for our team, and represented another stepping stone towards HUYA’s future success.”

The 2016 American Business Awards will be accepting entries through February 18 and late entries (with payment of a late fee) through March 16. Find out how to enter here.

The 2016 Asia-Pacific Awards is now open and will be accepting entries through March 23. Find out how to enter here.

The Benefits of Additional Exposure

Mireille was also appreciative of the broader awareness a Stevie Award can provide. “As we continue to build our presence in the Asia-Pacific region, the additional exposure that the Stevie award has given HUYA continues to be extremely helpful,” she told us. “Since receiving the award, HUYA has opened new offices in South Korea, taking our proven business model to that country. The recent agreement between HUYA and the Korean Drug Development Fund (KDDF) will facilitate partnerships with local companies and research institutions to accelerate the development and commercialization of Korean pharmaceutical discoveries for global markets.”

“This expansion into South Korea adds to our presence in the U.S., Japan, and eight strategic locations throughout China,” continued Mireille. “This builds on HUYA’s overall strategy to be the partner-of-choice for innovative pharmaceutical companies in emerging centers of excellence worldwide.“

We asked Mireille what new areas of biopharma innovation her company would be working on in the coming year. “Looking ahead, we see China and other Asia-Pacific countries as a wellspring of innovation. In the coming year, HUYA will continue to implement its uniquely cost-efficient, reduced-risk model for drug development to advance promising molecules from this region,” she explained. “This model includes using preclinical and clinical results from tests carried out in China to create the most time, cost, and risk efficient therapies to be brought to the United States and other major markets. We will also continue to expand our activities in other Asian centers of biopharma research excellence, including South Korea and Japan, to source and add value to promising molecules.”

Mireille founded HUYA to accelerate development and value creation for China-sourced innovations worldwide. Many such compounds have been validated through a rigorous discovery, selection and development process in China, so this model streamlines and accelerates development globally, while lowering risk. HUYA has:

HUYA opened an office in Japan in September 2014 to support future expansion in that country.

The Value of Cooperation

Looking ahead, Mireille will lead HUYA’s efforts to continue building relationships to make candidate compounds more accessible internationally, bringing value for both innovators and developers. Mireille and HUYA aim to be recognized as a main driving force that brings out the value of the Tripartite Cooperation between China, Japan, and South Korea in developing novel therapeutics to benefit patients in the three countries and worldwide.

Building Momentum in the Asia-Pacific Region

“I am inspired every day by the talented people who surround me, including HUYA’s dedicated employees and the world-class advisory boards who share their passion and talents,” explained Mireille. “In future, it will be exciting to watch as biopharma R&D continues to build momentum in the Asia-Pacific region. The HUYA teams in San Diego, Tokyo, Seoul and our eight China offices remain committed to globalizing Asian innovation.”

Concluded Mireille: “By building relationships and employing approaches such as in-licensing, alliances, co-development, research funding, and creative financial partnerships, HUYA is poised to bring pharmaceutical discoveries to benefit patients around the world.”

Mireille Gillings, Ph.D., a visionary leader with 22 years of scientific and operational experience in the biotech sector, has been the driving force in establishing HUYA Bioscience International. At Quintiles, a Fortune 500 company, she was the first woman to be appointed to the Board of Directors since the company’s privatization and subsequent IPO. Mireille is Co-founder of GHO Capital, a private equity fund specializing in global health opportunities. She serves on the Board of Senté Inc., a science-based skincare company, and is a member of the U.S. Pasteur Foundation Board. Mireille has a Ph.D. in Neuroscience from Radboud University Nijmegen, the Netherlands, and has held post-doctoral fellowships at Bordeaux University and Scripps Research Institute. She speaks fluent English, Dutch, French and Spanish.

HUYA Bioscience International is a leader in enabling and accelerating the global development of novel biopharmaceutical product opportunities originating in China. HUYA has established extensive collaborations with Chinese biopharmaceutical, academic and commercial organizations to speed development and value creation in worldwide markets for China-sourced product candidates. With the largest Chinese compound portfolio covering all therapeutic areas, HUYA has emerged as the partner of choice for building and maximizing the value of biopharmaceutical innovation in China. HUYA has offices in the U.S., Japan, and eight strategic locations across China, with joint headquarters in San Diego and Shanghai. With the largest team of scientists working with Chinese innovators, HUYA identifies and advances promising drug candidates globally. For more information, go to www.huyabio.com.