Finalists in 19th Stevie® Awards for Women in Business Announced

Finalists were announced today in the 19th annual Stevie® Awards for Women in Business, the world’s top honors for women entrepreneurs, executives, employees, and the organizations they run.

The Stevie Awards for Women in Business are produced by the creators of the prestigious American Business Awards® and International Business Awards®, among other business awards programs. The Stevies are widely considered to be the world’s premier honors for achievement in the workplace. 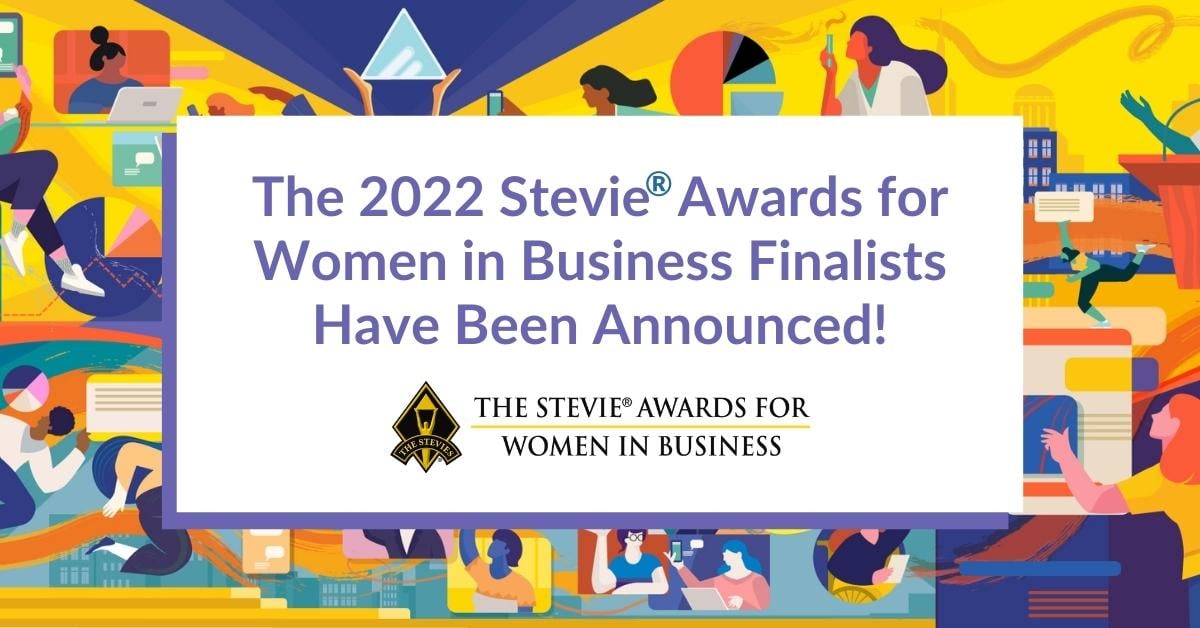 This year’s Gold, Silver, and Bronze Stevie Award placements from among the Finalists will be revealed during an awards banquet at Caesar’s Palace Hotel & Casino in Las Vegas, Nevada on Friday, November 11. More than 500 women and their guests from around the world are expected to attend the presentations, which will be broadcast via Livestream.

More than 1,500 nominations were submitted this year by organizations and individuals for consideration in more than 100 categories including Executive of the Year, Entrepreneur of the Year, Startup of the Year, Women Helping Women, and Women-Run Workplace of the Year. Nominations were submitted by organizations in 27 nations including Australia, Austria, Belgium, Brazil, Canada, China, Egypt, France, Germany, Hungary, Indonesia, Ireland, Kuwait, Mexico, Netherlands, Pakistan, Philippines, Poland, Romania, Singapore, Taiwan, Thailand, Turkey, Ukraine, United Arab Emirates, United Kingdom, and the United States.

Among the many extraordinary organizations and women who have been recognized as Finalists, the following stand out as those with four or more Finalist nominations:

Finalists were determined by the average scores of more than 200 professionals around the world, organized in seven juries. Their scores will also determine the Gold, Silver, and Bronze Stevie placements from among the Finalists, to be announced on November 11.

The Stevie Awards for Women in Business event will be complemented by the fifth edition of the Women|Future Conference, to be held virtually on November 8-10. The conference is for women professionals looking to gain unique perspectives from industry leaders, build resilience, network, and prepare for change. The conference addresses the most pressing business issues of tomorrow, from trends in social media marketing and workplace DEI to the next generation of technology, overcoming adversity, and the future of work. Conference registration is just $99 ($39 for students) and is available at http://www.WomenFutureConference.com.

The 12th annual Stevie Awards for Women in Business is now accepting entries. All female entrepreneurs, executives, employees, and the organizations they run, worldwide, are eligible to be nominated.

A new feature for this year's competition is an Entry Kit Brochure. The PDF brochure details all the information you need to submit nominations. 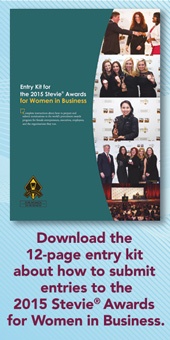 The program will be especially useful to those who are new to submitting entries to the Stevie Awards for Women in Business. In just a few short minutes of browsing the Entry Kit Brochure, you will find out which categories best suit your organization and how to submit entries.

Get the Entry Kit Brochure now:

How to Submit Your Entries

After you have chosen your categories and prepared your entries according to the requirements per category, do the following:

There's also a webpage version of the entry kit available to you.

The early-bird entry deadline, offering reduced entry fees, is July 22. The final entry deadline is August 26, and late entries will be accepted through September 23 with payment of a late fee. Winners of the 12th annual competition will be announced at a gala awards dinner at the Marriott Marquis Hotel in New York on November 13, 2015.  Attendance is not required to win.


This year the Stevie Awards for Women in Business will honor women in more than 85 categories including, among others, Entrepreneur of the Year, Executive of the Year, Maverick of the Year, Mentor or Coach of the Year, Lifetime Achievement Award, Employee of the Year and Most Innovative Company of the Year.

America Mean Business, the landmark new event about how to start, grow, and manage your own business, is on June 13-15 in New York City.

Pre-registration is free through 11:59PM tonight. You can attend for all three days or any part of the event, it's entirely up to you. (Registration at the door is just $10.)

Here are some of Wednesday's sessions and events at Metropolitan Pavilion, 125 W. 18th Street in Manhattan, you can learn from with your free pre-registration:

Help us spread the world about this great new event. Tell your friends, family, and co-workers that today is the last day for free online pre-registration, and that registration at the door will be $10.

If you can attend for only an hour, or for all three days, America Means Business will help you to make your dream a reality!

One Week to America Means Business

America Means Business, a landmark event about how to start, grow, and manage a business, is only one week  away! To take place in New York City on June 13 - 15, 2012, America Means Business will feature dozens of events about how to start and grow your own business, and everything in between, from how to finance and staff your business to how to develop your products and services, how to market them, and how to service your customers.

If you haven't yet registered, you can pre-register for free here. (Registration at the door is just $10 and the first 2,000 AMB registrants will be entered into a drawing for a free iPad.)

Among the sessions you can learn from with your free registration are:

and so many others. You can also schedule a free 30-minute consultation with an experienced small business consultant, learn from vendors in the America Means Business expo, and network. See the complete schedule online.

One Month to America Means Business

America Means Business, a new event about how to start, grow, and manage a business, will take place June 13-15 in New York City. If you haven't yet registered, you can register for free through May 25 here.

As we get closer to this landmark event about entrepreneurship, we want to take this opportunity to inform you of the new and exciting opportunities available for small business owners and entrepreneurs alike.

America Means Business is presented by the Stevie® Awards, the organizer of the annual American Business Awards. America Means Business will culminate with the presentation of the 10th annual ABAs on June 18. Connect with us on Facebook, LinkedIn, and Twitter to get up to the minute news about the program.

The Stevie® Awards, organizer of the world’s premier business awards, today announced the preliminary schedule of events for America Means Business, a landmark three-day event about entrepreneurship, taking place in New York City on June 13, 14, and 15.

Headquartered at the Metropolitan Pavilion at 125 West 18th Street, with events taking place there and at other locations throughout New York City, America Means Business will feature informative panel discussions, “How I Did It” case studies, an exposition of products and services that can help aspiring entrepreneurs and small business owners, and many other events about how to start and grow a business.  Highlights from the current schedule include:

“Since announcing America Means Business in February, we have received a huge response from entrepreneurs and business experts around the country seeking to participate through speaking, sponsoring, exhibiting, and attending,” said Michael Gallagher, president and founder of the Stevie Awards. “We are very pleased to announce our preliminary schedule, and are looking forward to adding even more events to the program that will benefit and inspire future and current entrepreneurs.”

America Means Business still has openings for those interested in speaking or staging an event related to entrepreneurship and business management. There is no cost to participate and proposals are being accepted online until June 13. Attendee registration for America Means Business is free through May 25, and just $10 thereafter.  Details on creating an event and registration are available at www.AmericaMeansBusiness-NYC.com.

The Stevie® Awards, organizer of the world’s premier business awards, announced several scheduling details for America Means Business,  its landmark new event about how to start, grow, and manage a business. To take place in New York City on June 13 - 15, 2012, America Means Business will be packed with educational, networking, and social events that will show entrepreneurs how to bring their dreams to life.

America Means Business is being crowdsourced, meaning that dozens of organizations across the nation are contributing to its programming. Anyone who wants to hold an event related to entrepreneurship and business creation is invited to become an Event Partner. While most events will be held at our headquarters, Metropolitan Pavilion, 125 W. 18th Street, New York, NY, our Event Partners can choose to hold their event anywhere in New York City. America Means Business will promote events from all partners equally, regardless of location.

There is no fee to participate, and our structure allows all of our partners to maintain creative control while being a part of the overall event. Watch this recording of our March 13 webinar to learn how your organization can participate.

The Stevie Awards has published several new events to the AMB calendar of events including inspirational keynotes, basic startup education by SCORE, networking opportunities, an exposition, and many other events about how to start and grow a business and everything in between. Click here to view the America Means Business calendar.

We will continue to add to and update the AMB calendar of events so we suggest periodically checking to learn about new opportunities for entrepreneurs at America Means Business.

Get updates from America Means Business. Connect with us on Facebook, LinkedIn, and Twitter to get up to the minute news about the program.

The Stevie Awards to stage inaugural three-day event in New York City on starting, growing and managing a business -- June 13 - 15, 2012.

The Stevie® Awards, organizer of the world’s premier business awards, today announced that it will stage a landmark three-day event about entrepreneurship throughout New York City on June 13, 14, and 15.

America Means Business will feature dozens of inspirational keynotes, informative panel discussions, “How I Did It” case studies, basic startup education by SCORE, networking opportunities, an exposition, and many other events about how to start and grow a business and everything in between.

Those interested in staging an event related to entrepreneurship and business management during America Means Business are invited to become Event Partners. There is no cost to participate.

“By creating America Means Business, we hope to help spark an entrepreneurial revolution in the U.S.A.,” said Michael Gallagher, president and founder of the Stevie Awards, which are celebrating their 10th anniversary in 2012. “Small businesses are the building blocks and the hiring engines for widespread economic well-being, and we want to enable many more people to realize their dreams of growing their own businesses.”

According to a report by the U.S. Bureau of Labor Statistics, the total number of self-employed Americans with incorporated and non-incorporated businesses declined 2% in 2011. The 27 million small businesses in America represent 99.7% of all employers and employ 49.2% of the private sector workforce, according to the Small Business Administration’s latest small business profile. Recognizing the importance of small business to the sustainability of the economy, America Means Business will aim to address the needs of entrepreneurs and assist and inspire those who have the dream of opening their own business.

America Means Business will be headquartered at the Metropolitan Pavilion at 125 West 18th Street, with events taking place there and at other locations throughout New York City.