Who's Coming to the Stevie Awards for Women in Business This Friday? 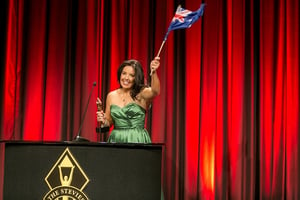 The 2018 (15th annual) Stevie® Awards for Women in Business - the world's top honors for female entrepreneurs, executives, employees and the organizations they run - will be presented this Friday, November 16 at the Sheraton New York Times Square Hotel in New York City.  More than 540 nominees and their guests from more than 20 nations will attend for the announcement of the Grand, Gold, Silver and Bronze Stevie Award winners.

Download the official program book of the awards presentations.

The presentations will be broadcast live, beginning at 7:30 pm ET.

Here are the organizations that as of this writing will be represented at the event on Friday.

The 2019 edition of the Stevie Awards for Women in Business will open for entries in May.  Join the mailing list and the 2019 entry kit will be emailed to you as soon as it is available.

The male dominated construction sector isn’t usually known as a place where women enjoy a level playing field with their peers—but when it comes to shaping the industry’s future, females are taking on a key role.

One of these leaders is Jessica Pollack, a head consultant and trainer with the U.S. technology firm PlanGrid. Her mission: getting everyone on the jobsite, from laborers to project managers, to build more efficiently and cost-effectively.

The San Francisco-area-based company she works for has become a force in the industry in recent years, offering a mobile app that’s been used on more than 500,000 projects around the world. 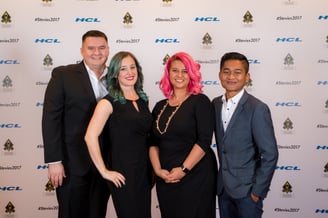 The construction productivity software allows employees to manage blueprints, specs, photos, RFIs and field reports right from their phone or tablet, enabling increased collaboration on the jobsite. To date, it’s been used in more than 70 countries by prominent corporations like DPR, Granite, NVIDIA, Target Corporation and Tutor Perini.

Pollack’s job is to help users discover a new way of managing projects—one that saves valuable time and effort on the ground. Through webinars and on-site learning sessions, she helps make sure her predominantly male audience gets the most of the software.

“I love my job,” Pollack writes on the company’s blog. “I get to meet other construction professionals around the world and introduce them to the magic of PlanGrid.”

PlanGrid is part of an all-too-rare breed in Silicon Valley: a tech company where women are empowered to take on leading roles. The outreach is led by CEO Tracy Young, a female entrepreneur who co-founded the organization in 2011.

Throughout its short history, PlanGrid has put women in a number of key roles, priding itself on a varied workforce in an industry not especially known for its diversity.

Pollack, who’s been part of the team since 2015, has made the most of her opportunities. In recognition of her important teaching role in the construction industry, she recently won the Gold Stevie Award in the 2017Stevie Awards for Women in Business for “Female Employee of the Year” in the Computer Software category.

“It will definitely show women that they can succeed in construction and technology,” Pollack said at the event, held November 17, 2017, in New York City. 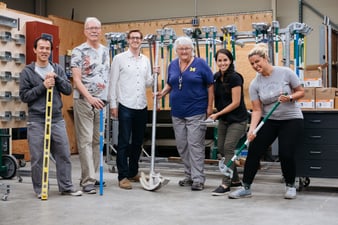 Pollack didn’t see herself landing in either of these industries when she enrolled in Smith College, an all-female liberal arts school in Massachusetts. At the time, she wanted to become an event planner, a career that she thought would make good use of her interpersonal and organizational skills.

That all changed after she took her first architecture course and switched her major to architecture then took an internship with Turner Construction after her junior year. She was offered the chance to work on the new Terminal 2 at San Francisco International Airport. “It was then that I realized I wanted to work in construction,” she says.

At Turner, she was fortunate enough to find a number of female role models, including some in key management spots.

Pollack would later take a “once-in-a-lifetime opportunity” to help build a premier hotel and casino in Macau, China. She insisted, though, that the company use PlanGrid, a software solution she first used at Turner.

“When my time in China ended, I wanted to stop by the PlanGrid office to thank all the wonderful people who helped me succeed,” she recalls. “By the time I visited, I was already interviewing with construction companies around the Bay Area, and PlanGrid asked me if I would be interested in working on their team instead.”

“At first, I was hesitant to switch careers and leave the general contracting world, but it was clear that PlanGrid was a supportive company. It felt like the whole team was family.”

In her role with PlanGrid, Pollack is teaching a new crop of project engineers and tradespeople how to achieve the same efficiencies she realized as a user of the app.

“My knowledge and expertise saves people (and projects) time, money and paper,” she says. “It’s a good feeling.” Marlene Fox-McIntyre, Principal of Athene Solutions LLC in Coral Springs, Florida, USA, has been named the chair of the jury for the New Product and Service categories of the 2017 Stevie Awards for Women in Business, the world's top honors for female entrepreneurs, executives, employees and the organizations they run.

Marlene Fox-McIntyre has over 30 years of engineering and management experience in the government, private industry, and non-profit sectors, and she proudly served as a Captain in the United States Army Reserve.  Marlene recently started her own high-tech business, Athene Solutions LLC. The company specializes in the development of unique technologies to make aviation safer, and to deliver quality-of-life technologies for the home. According to Marlene: “We are currently developing several 'secret sauce’ technologies that will be announced as soon as patent applications have been filed. Stay tuned!”

In 2016, Marlene won the Stevie Award for Woman of the Year – Technology for her leadership role at Hilton Software LLC as Program Executive and head of business operations, responsible for the success of all Hilton Software programs, and ensuring client and end-user satisfaction across all company products. According to Dr. Hilton Goldstein, CEO and Chief Architect of Hilton Software, “Marlene provided stability to our company. She has proven to be invaluable in the management of our government and commercial software programs. Not only did she bring her expertise in technology into the firm, but many years of experience in the public sector. I am very proud of her achievements and privileged to have her run our incredible line of products.”

Marlene earned her Bachelor of Science degree in Mathematics and Chemistry from the University of Texas, a Graduate Certificate in Engineering from the Army Materiel Command, and a Master’s Degree in Technical Management from Johns Hopkins Whiting School of Engineering, where she also lectured for several years. She is a certified Project Management Professional (PMP) and earned her Microsoft Certified Solutions Developer (MCSD) in 2006.

Marlene is honored to have been selected to Chair the 2017 New Product/Service Awards Judging Committee.  “Our committee is looking forward to the exciting challenge of choosing the best new products and services from an incredibly talented pool of nominees,” said Marlene. “Good luck and best wishes to all the outstanding nominees!”